For a project that needs a cooling fan e.g. an enclosed Raspberry Pi4 can require cooling - a small custom printed circuit board (PCB) has been designed with a PNP transistor as a switch that can switch the fan on/off by the setting of a GPIO pin HIGH/LOW.

Using this PCB, populated with its few simple components, a cooling requirement can be controlled by a short Python program that:

The two sides of the 'bare' PCB are shown in the image above left and the 3 images below show the various stages of a test build. 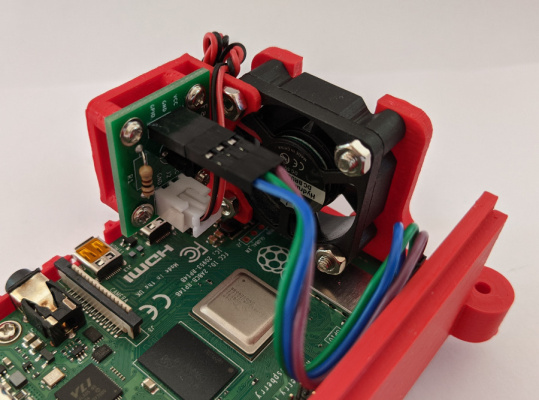 A typical use is shown in the image on the right where a Raspberry Pi4 is mounted in a custom3D printed enclosure (shown here without its enclosing lid) and an additional custom 3D printed bracket is used to mount the PCB control board.

Some simple test/development Python code has been developed that can be run continuously that:

With the use of this arrangement for the PCB/fan with a Raspberry Pi4 in its fully enclosed 3D printed housing, it was found that:

The images below further illustrate a Raspberry Pi 4 in the 3D printed fan-cooled case:

The 3D print designs for the case and the PCB mounting bracket can be downloaded from the Prusa web site here.